SAN ANTONIO – According to new data from SmartAsset, The Alamo City is the eighth best city in the nation for first-time homebuyers. 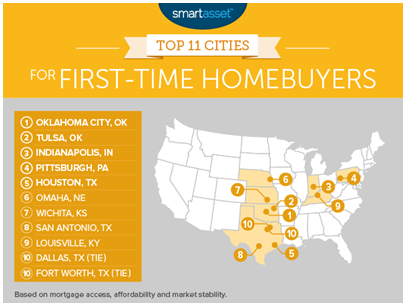 Despite its booming housing market, San Antonio still remains highly affordable with a price per sf of $80.50.
San Antonio shares a place among the top ten with a few other cities in Texas: Houston finished at No. 5 while Dallas and Fort Worth tied at No. 10.
SmartAsset came up with their rankings by examining cities with a population of at least 300,000 and considering key metrics reflective of mortgage accessibility, affordability and stability in each market.
Other Texas cities made the top 20 include Arlington at No. 13, Corpus Christi at No. 17 and Austin ranking No. 20.
San Antonio’s housing market has been strong over the past several years.
According to Federal Housing Finance Agency data, prices for San Antonio’s housing market increased 8 percent from third quarter 2014 to third quarter 2015.
The Alamo City had a loan funding rate of 62 percent—third best among the top 25 cities on the list.